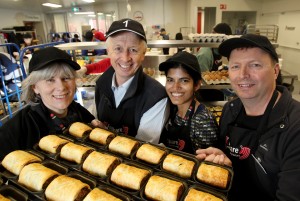 Volunteers cook up a storm at FareShare's new Abbotsford kitchen

Imagine collecting surplus food from supermarkets, farmers and manufacturers and using it to cook 20,000 free meals for charities every week. Thanks to the Helen Macpherson Smith Trust it’s now happening.

Late in 2010 40 volunteers interviewed nearly 100 charities. They found that while FareShare was cooking 9,000 meals a week it was only half as much as was needed by agencies providing food relief. At the time FareShare was already collecting more surplus food than it could cook and passing it directly onto charities. And while the charity had 350 regular volunteers, there were 300 people on a waiting list keen to help out in the kitchen. So FareShare set out to establish a new kitchen – one that could turn out one million meals a year.

In May 2013 FareShare opened the doors to Australia’s largest charity kitchen, in Abbotsford. New ovens were commissioned and 200 new volunteers were inducted. School classes were put to work in the mornings and corporate groups filled up the kitchen in the afternoons.

FareShare’s meals are now being supplied to hundreds of charities across Melbourne and increasingly to regional Victoria. The charity is even trialling a free catering arm that cooks regular meals for some of Melbourne’s largest community dining halls.

FareShare’s long term vision is for Victorian charities to have as many of their meals as they need to support people who are going through hard times.