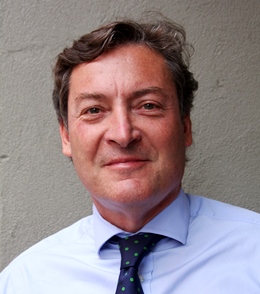 The objectives of HMS Trust’s investment activities are twofold: first to achieve long-term appreciation of the value of the corpus, ahead of inflation, and secondly to generate sufficient income to fund the annual grant giving program and operating expenses.

Long-term growth in the value of the corpus is essential if the Trust is to serve Victoria’s communities in the future as well as it has done in the past.

Trustees have delegated management of the Trust’s investments to an Investment Committee made up of three Trustees, the Chief Executive Officer and the Investment Executive, who is an experienced investment professional. The Committee also receives investment advice from Frontier Advisors, one of Australia’s leading investment consultants. Guiding the Committee’s activities is a detailed Investment Policy Statement which sets out the asset allocation for the portfolio and various risk control measures.

Investment operations are managed internally wherever possible to maximise control and minimise costs. Last year the total costs were 0.33% of assets, including fees paid to external managers of international shares and unlisted infrastructure funds.

The chart below shows how the value of the corpus has changed since 2000, and compares that with the increase in the Consumer Price Index (CPI), a measure of inflation. Over that period the corpus has consistently remained ahead of inflation, achieving our primary investment objective. At June 2017 the corpus was valued at $110m, a margin of $31m or 40% above the CPI. 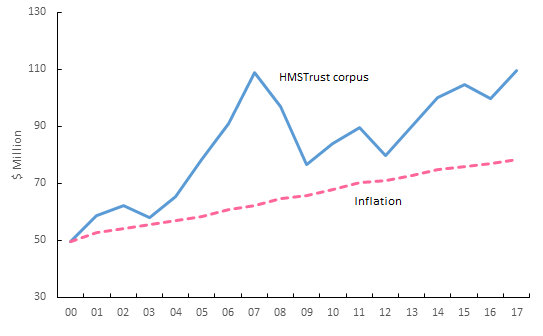 It is also pleasing to note that after 10 years the corpus has now fully recovered from the losses suffered during the global financial crisis. In contrast, the ASX200 Index is still 9% below its June 2007 level.

Over the 2017 financial year the total return of the portfolio (meaning capital gains plus income, adjusted for cash movements) was a respectable 13.4%. This favourable return reflects a high exposure to both Australian and international shares, no exposure to bonds, a strong performance by our unlisted infrastructure manager, and an upward revaluation of our property holding. The chart below illustrates the asset allocation of the corpus at the end of June 2017. 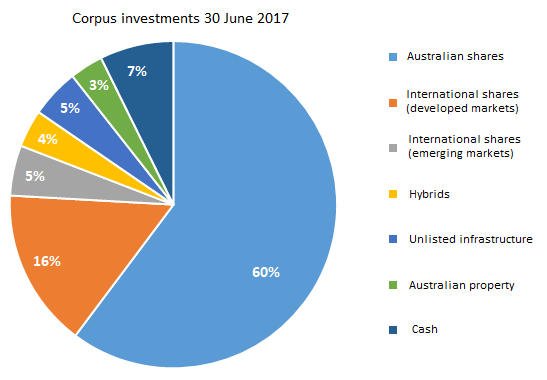 Equity markets rallied mainly because global economic growth surprised to the upside. After many years of tepid activity following the global financial crisis, growth picked up pace in the fourth quarter of 2016 and has remained relatively buoyant since. At the same time inflation has remained low, and while the peak of central bank stimulation is now behind us, the path of normalisation has so far been cautious and gradual. Commodity prices also showed surprising strength as the Chinese government stimulated its economy.

In terms of income generation, we fell modestly short of our objective this year. Meeting income targets during a period of record low interest rates is a difficult challenge. However we remain disciplined in our investment process and will not take on inappropriate levels of risk simply to generate short term income.

During the year Trustees approved changes to the Investment Policy Statement which introduced a principles-based ethical overlay to our investment process and also allowed the Investment Committee to invest up to 2% of the corpus in impact investments subject to strict conditions.

As a result of this, we switched our investment in the Vanguard International Shares Fund to a similar Vanguard fund which excludes companies engaged in the tobacco, controversial weapons, and nuclear weapons industries.

During the year we approved our first such investment when we participated in a capital raising by the Murray-Darling Basin Balanced Water Fund. This fund was established in 2015 to purchase permanent water entitlements and lease or trade annual water allocations in the southern Murray-Darling system. In years of plentiful supply, when prices are low, water will be donated for environmental watering of significant wetlands. The environmental program is being overseen by The Nature Conservancy and early indications are encouraging.