From the Chair & CEO

On behalf of the board of Helen Macpherson Smith Trust, it is our pleasure to present the Annual Report for the year ending 30 June 2022.

2022 marked a year of reflection and transition, and one of celebration and loss for the Helen Macpherson Smith Trust. As we transitioned out of lockdowns and to a new ‘covid normal’, our grantees, as ever, showed an agility and strength in their response to ever-growing community need.

During the year we celebrated the 70th anniversary of the Trust, marking 70 years since Helen’s death and the formation of the Trust, her most generous gift to Victorians. In her lifetime, Helen paid the school fees of her nieces, and we honored her commitment to supporting women in education with a gift of $150,000 to Western Chances to support girls experiencing disadvantage in Melbourne’s west to achieve their education goals.

As part of the 70th anniversary program, and in support of historical and contemporary writing by women, grants were made to both the State Library of Victoria and the Stella Prize. A signature grant of $1 million to the State Library of Victoria supports the acquisition of historical works by women writers through the Women Writer’s Fund, as well as associated public programming. The grant sees historical works by women writers made available to all Victorians through the state collection, and was committed alongside a grant of $250,000 to the Stella Prize to foster a new generation of women writers through the organisation’s campaign to secure the Prize in perpetuity.

Over the year, the Trust made 24 grants totalling $4.2 million. The move to fewer, larger grants reflects a change in strategic direction for the Trust, emphasising deeper relationships with selected community partners.

Total income generated from the corpus was $6.1 million, 34% higher than the $4.5 million generated in FY21 due to the receipt of windfall dividends. While operating expenses remained constant at $1.3 million, due to the rise in revenue, our operating expense ratio dropped to 16.5%. The Trust reinstated its power of accumulation, capitalising $0.5 million from the Income Account to the Capital Account. After making grants of $4.2 million, the Trust’s unapplied income at the end of FY22 was $2.9 million, up from $2.8 million at the end of FY21.

With great sadness, in February we marked the passing of Darvell M. Hutchinson AM, a visionary leader in the philanthropic community in Victoria and a passionate steward of Helen’s legacy. In 1964 at the age of 33, Darvell was appointed trustee of the then Helen M. Schutt Trust. This began 50 years of dedication and determination to realise the legacy of Helen Macpherson Schutt (née Smith).

We especially thank Trustees for the dedication and care which they bring to upholding the legacy and charting the future of the Trust. Particular thanks go to Claire Higgins and Andrew Sisson for the way in which each has respectively chaired the Grants Committee and Investment Committee. 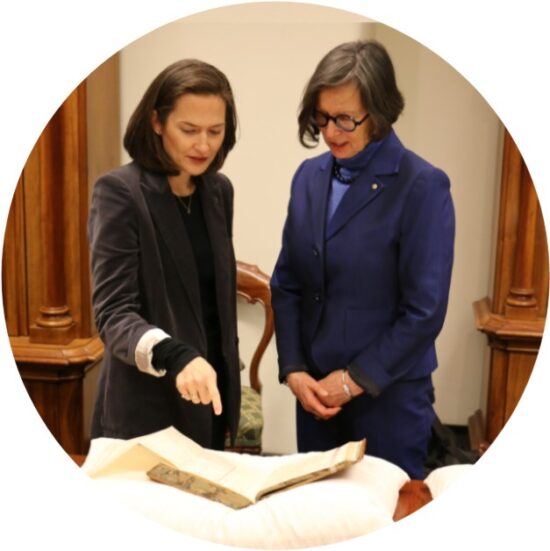 Debra Morgan, CEO and Catherine Walter AM, Chair viewing a work acquired through the Women Writer’s Fund at the State Library of Victoria

Next Vale Darvell Hutchinson AM Previous 2022 IN REVIEW