In 2022 we marked the passing of Darvell M. Hutchinson AM, a visionary leader in the philanthropic community in Victoria.

In 1964 at the age of 33, Darvell was appointed trustee of the then Helen M. Schutt Trust. This began a lifetime of dedication to realising the legacy of Helen Macpherson Schutt (née Smith).

During his remarkable 50-year stewardship of the Helen Macpherson Smith Trust, Darvell played a leading role in growing the little-known bequest of £275,000 to a respected philanthropic trust benefitting Victoria and Victorians. The Trust now manages a corpus of over $134 million, securing a future of grant making and collaboration, and building a strong, just and sustainable Victoria.

In 1994, Darvell became a Member of the Order of Australia (AM) for service to the community, and was conferred with a Doctor of Laws (Honoris Causa) by Monash University, also for his contribution to the Victorian community and “to Melbourne’s role as a major centre of philanthropy in Australia”.

Major contributions under Darvell’s leadership at the Trust include the founding of Macpherson Smith Rural Foundation (now YouThrive) and the establishment of a longstanding partnership with Melbourne Business School, including an endowment to establish a Helen Macpherson Smith Chair of Leadership for Social Impact. 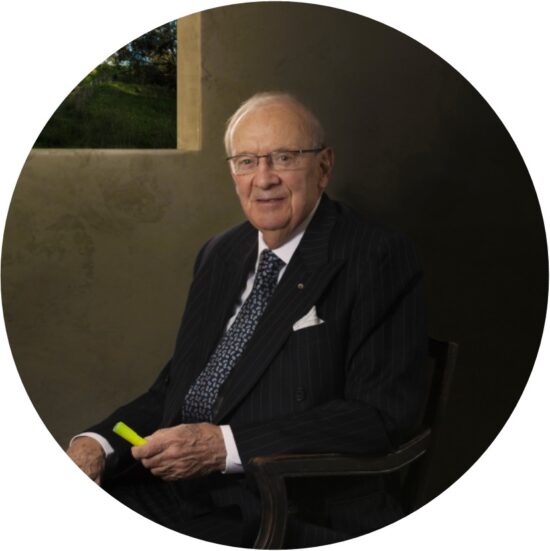 Detail of Darvell M. Hutchinson AM (after Moroni) 2014, by Ponch Hawkes

Darvell was integral to ensuring communities devastated by the 2009 bushfires were financially supported, and this legacy continues today in partnership with the Foundation for Rural & Regional Renewal, with support of the Bushfire Recovery Fund.

On retirement from the Trust in 2014, and in recognition of Darvell’s legacy, the Trustees of Helen Macpherson Smith Trust created the Hutchinson Indigenous Fellowship, a perpetual gift supporting year-long residencies for Victorian Indigenous artists at the University of Melbourne.

Darvell’s visionary leadership extended beyond the Trust. Galvanizing local and international support and expertise, Darvell helped grow the Australian philanthropic sector and served on the Philanthropy Australia council for nine years, including as its President from 1987 to 1988.

He was honoured with a Lifetime Membership of Philanthropy Australia in 2014 in recognition of his outstanding service to the sector.

Darvell held many other governance roles in charitable and community organisations, including becoming a Life Member of the National Gallery of Victoria, Patron of Royal District Nursing Service and of The Asthma Foundation of Victoria, and Honorary Fellow of Melbourne Business School.

Darvell described his fifty years with the Trust as “a mere drop in the ocean”, however his legacy will be forever intertwined with that of the Trust, and he is owed a great debt of gratitude for his care and diligence in bringing Helen’s legacy to life. 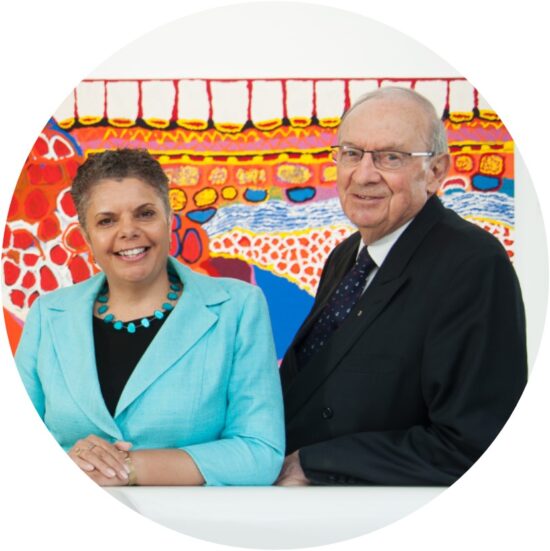 Deborah Cheetham and Darvell Hutchinson in front of the tapestry, Dulka Warngiid (Land of All) 2007, Australian Tapestry Workshop, at Melbourne Recital Centre

Next Our Story Previous From the Chair & CEO