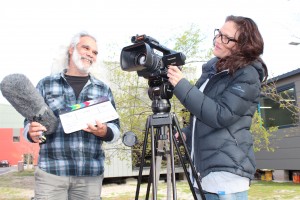 The Helen Macpherson Smith Trust partnered with Open Channel and National Indigenous Television in a unique training production program that ran from July to October 2013, developing a new core group of Indigenous film-makers from language groups across Victoria. The grant supported the program to bring renowned film-makers to Melbourne, including Allan Collins ACS (Cinematographer on the award winning Beneath Clouds, by Ivan Sen) to share knowledge, skills and wisdom with the burgeoning film-makers. The program brought to life a diversity of stories and explored themes including Aboriginal justice, reconnecting with songlines, and language revival. The films provide an important cultural voice to Victorian Aboriginal communities and help to facilitate broad cultural understanding between Aboriginal and non-Aboriginal people.

Participating students achieved a nationally-recognised Certificate III in Media qualification, and a number are beginning to work on their next screen projects after completing the program. Open Channel’s Training Manager, Daniel Schultheis said “This is really a very significant initiative. Many Aboriginal stories we see in Australia have come from other states such as the Northern Territory and Queensland, where there is a bigger pool of filmmakers. A lot of Victorian stories have not been told yet.”

Open Channel Executive Director Marc Gracie commented, “Open Channel is proud to be a part of this important project which ensures that expanding opportunities in film and television to create Aboriginal screen stories are underpinned by strong production skills, talent development, and professional networks.”

Participant Kerri-Lee Harding, director of A Rare Gem: Coloured Stone said, “I am really so very proud of my fellow students support in production, plus the results of their amazing films.  Still pinching myself we managed to film Bunna with ben from Regurgitator, in full swing recording the 10th coloured stone album. None of this would have happened without Open Channel’s strong unwavering support and encouragement and positivity has kept me strong and incredibly focused. I think together we made a deadly variety of excellent Victorian short docos and be fab to soon see them all screen on NITV and gonna be deadly to see more of representation of our Melbourne / Victorian community members.”