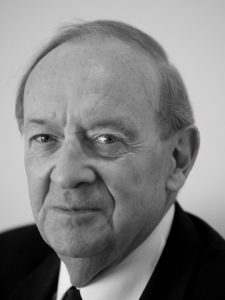 Trustees and staff honour the life and legacy of Darvell M. Hutchinson AM

With great sadness, we mark the passing of Darvell M. Hutchinson AM, a visionary leader in the philanthropic community in Victoria.

In 1964 at the age of 33, Darvell was appointed trustee of the then Helen M. Schutt Trust. This began a lifetime of dedication and determination to realise the legacy of Helen Macpherson Schutt (née Smith).

During his remarkable 50-year stewardship of the Helen Macpherson Smith Trust, Darvell played a leading role in growing the little-known bequest of £275,000 to a respected philanthropic trust benefitting Victoria and Victorians. Today, the Trust has contributed $135 million to charitable causes in Victoria with total assets of over $140 million.

Significant contributions during Darvell’s time at the Trust include the founding of the Macpherson Smith Rural Foundation (now YouThrive), a key relationship with the Melbourne Business School including the endowment of the Helen Macpherson Smith Chair of Leadership for Social Impact, and the establishment in 2009 of the Trust’s own bushfire fund to support communities devastated by bushfire.

In 2014, in recognition of Darvell’s extraordinary legacy, the Trustees of Helen Macpherson Smith Trust created the Hutchinson Indigenous Fellowship, a perpetual gift supporting 12-month residencies for Victorian Indigenous artists at the University of Melbourne.

Darvell’s vision for philanthropy extended beyond that of the Trust. Together with a small group of philanthropic leaders from Melbourne, Darvell attended the first world congress on philanthropy in Canada in 1987. Inspired by the potential for philanthropy to impact the broader community, he contributed to the charge for the greater professionalism and expansion of philanthropy in Australia. Over subsequent decades, Darvell provided significant support to the peak body, Philanthropy Australia, with funding, advice and pro bono support. Darvell was a council member from 1985 until 1994, and served as president from 1987-1988. In recognition of Darvell’s 50 years of outstanding service to philanthropy, he was honoured with Life Membership of Philanthropy Australia in 2014.

In 1994, Darvell was honoured as a Member of the Order of Australia “for service to the community”, and Monash University conferred upon him the degree of Doctor of Laws honoris causa for his contribution to the Victorian Community and “to Melbourne’s role as a major centre of philanthropy in Australia”.  Darvell was also honoured as a Life Member of the National Gallery of Victoria, a Governor of a number of charitable organisations, and a Patron of Royal District Nursing Service and of the Asthma Foundation of Victoria. In 2014, Darvell was welcomed as an Honorary Fellow of Melbourne Business School.

Darvell described his fifty years with the Trust as “a mere drop in the ocean”, however his legacy will be forever intertwined with that of the Trust, and we owe him a great debt of gratitude for the care and diligence he brought to bringing Helen’s legacy to life.